The beginning of July 2019 brings with it the launch of the AHA Centre Executive (ACE) Programme Batch 6, in which the ASEAN region’s leading disaster managers will undertake a 5-month intensive training course preparing them to become future disaster management leaders in their respective countries and abroad. 2019’s Batch 6 is made-up of 18 participants from all 10 ASEAN Member States, and will include a range of course and activities within the AHA Centre’s Jakarta office as well as field visits to a range of disaster-related sites. For the next few months the AHA Centre Diary will give readers a run-down on the programme’s implementation, with the following contributions made by participants themselves as they undertake their studies.

Participants arrived in Jakarta on June 29 – for some the first time setting foot on Indonesian soil. The ACE team from AHA Centre conducted briefings and organised a cultural orientation day where the members took a tour of the Jakarta Smart City and the Taman Mini Indonesia Indah. It was a fun-filled and informative day for the participants to get to know more, not only about Indonesia and AHA Centre, but also about each other. After a day of games and laughter, it was time to get down to business with the first course starting on 3 July. For the first time ever, ACE Programme participants underwent a course to build a strong foundation in communication skills, the English Communication in Disaster Management, the fruits of a partnership developed between AHA Centre and USAID’s Regional English Language Office (RELO).

The participants of the ACE Programme learnt more aspects of disaster management during the second week of English Communication for Disaster Management Training. Several modules were covered, including Disaster Preparedness and Stakeholders, Intercultural Conflict in Organisations and Communities, Risk Assessment, Rapid Need Assessment, Disaster Response Plan, and Post-Disaster Operations and Needs Assessment. Thus, during these studies, the participants not only learnt many activities that should be conducted in every phase of the disaster management cycle, but also some underlying factors that often-influenced crisis or disaster management activities, such as conflict and stakeholders analysis.

During the third week, ACE Programme participants learned more about incident command systems (ICS), increasing their familiarity with incident command systems in ASEAN Member States, as well as how to write primary scenario definition (PSD) based on various types of disaster events. On 20 July, the course finished successfully with a speech from Dr. Bradley Horn, the Regional Director of the Regional English Language Office (RELO) – US Embassy, Jakarta, alongside the provision of certification to each participant. On July 22nd the Opening Ceremony of the ACE Programme Sixth Batch on was held, officiated by H.E. Kazuo Sunaga, Ambassador of Japan to ASEAN, H.E. Dato Lim Jock Hoi, Secretary-General of ASEAN and Ms. Adelina Kamal, Executive Director of the AHA Centre.

Throughout the ACE Programme’s fourth week, participants were introduced to the regional disaster management processes through a course on the Introduction of the ASEAN Disaster Management and Emergency Response Mechanisms. The session was kicked-off with an overview by the Deputy Executive Director of the AHA Centre Mr. Arnel Capili, and continued with details of key elements such as AADMER, the AHA Centre Emergency Operations Centre (EOC), ASEAN Standby Arrangement, Disaster Emergency Logistics System for ASEAN (DELSA), Emergency Information Communication Technology (ICT), and Safety and Security. During this week ACE participants were assigned into pairs to prepare an AHA Centre Flash Update using a real disaster event as the scenario. This helps ensure participant understanding regarding crucial information that should be stated in a flash update, and to understand the challenges faced with the ability to prepare the update of general situation of a disaster in a short period of time prior to dissemination. 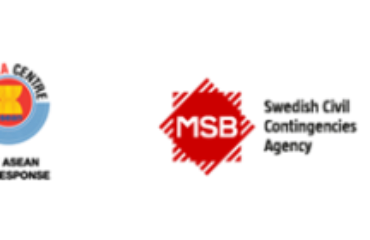